I've been tinkering with ways to train finger extension for about 8 years now. I've come up with several methods and even a few product ideas that I thought showed some potential.

Pictured to the right is a design I came up with in 2001. It's an idea I had in an effort to try to train finger extension. Try to look at the concept instead of my artistic capabilities. :)

Finger extension is all but forgotten about when it comes to training the hands. Think about everything we do in daily life that involves gripping, squeezing, holding, carrying, etc. - all finger flexion movements. Never do we have to open our hand against resistance.

Muscular balance is important in all parts of the body and the hands are no different. Finger extension is often the missing link even in serious grip training. Your grip can only be so strong if your extension is weak. Opposing muscle groups are often the limiting factor in any lift. Few people realize this or take it seriously.

There is the old method of opening and closing your hand inside a bucket of sand, or opening your hand on the inside of a jar. Company's like Iron Mind have developed products like the Outer Loops™ and Expand-Your-Hand Bands™ to assist in your finger extension efforts. Then of course, there is good old manual resistance - finger tip to finger tip.

I just recently learned of this device (or "grip toy" as I call them) where you can train finger extension and finger flexion with the same piece of equipment without any kind of adjustment whatsoever. It's called the Handmaster Plus™

This is a great invention! I thought that this was the best thing since sliced bread and hand grippers. I thought so highly of this product that it basically put my idea of producing something similar out of my head. Somebody had thought of a better design and put it on the market already!

But let me back up and say that I haven't actually used this product yet. I've been meaning to order one but I just haven't gotten around to it. The funny thing is, I probably won't now that I've stumbled onto something better. 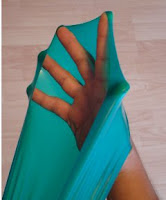 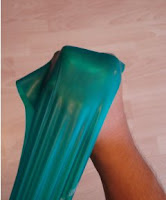 Like I said - simple equipment for a basic exercise. You can get a piece of Thera-Band from any physical therapist's office. All you need is about 24". Just wrap it around your fist and extend your fingers against it. For more resistance, pull the band tighter. You can also change the angle in which you hold the band to focus on a specific position of the hand/fingers. Use it for wrist extension (an equally important and perhaps just as neglected movement of the lower arm), dynamic thumb exercises and even finger abduction (spreading of the fingers). The possibilities are as vast as your imagination! 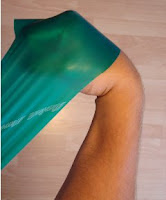 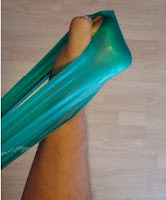 I like to train these movements with the Thera-Band with high reps - 20 or more. That's entirely personal perference though. You can pull the band so tight that you can barely eek out a 1RM if you want. Though I have found that the hands respond better to high repetitions. Call it targeting the slow twitch fibers, muscle pump or whatever you like, it just seems you get a better workout. 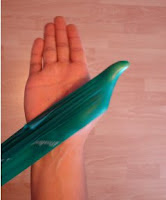 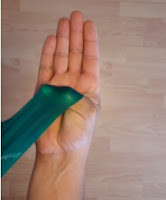 I'm not staking claim to be the first one who ever thought of using a Thera-Band to do these exercises, it just kinda dawned on me one day and I figured I would write about it. If you know of any other unique exercises performed with a Thera-Band, please post them up. I'd also be interested in hearing how you train finger extension and other rare hand/finger movements.
Posted by Dan Cenidoza at 4:15 PM

I had been looking for a device to train finger extension too and hadn't found anything particularly good. Some using rubber bands between the palm and fingers etc. I had been using a thera band like yourself and it's good but hard to quantify the pressure needed to complete the contraction and how to progress neatly. I have come across this:
http://www.thextensor.com/
But again there's no distinct way to increase tension and therefore progress but i like the fact it's one simple, worn device and you could train each digit individually as you can with the thera band.
I haven't been able to purchase one yet as i am in the uk and they are US based but i have contacted them about getting one shipped to me.
Anyway, that was a good article you wrote!